Six years ago Becky Beach, now 37, was dating a well-dressed business analyst with a fancy car. He proposed with a diamond ring. The relationship soured when he confessed, while house shopping, that his credit was in the gutter. His lavish spending had caused him to rack up $150,000 in credit card debt.

“I ended up deciding to break things off,” she said. “I gave him back the ring, which he probably bought on credit.”

People often skirt the truth early on in a relationship, especially if it’s about money.

When it comes to dating, 3 in 10 Americans admitted to lying about their salary, while over a quarter said they’ve hidden the truth about their spending habits, according to a recent survey of 2,000 adults, by Self Lender, a credit-building loan app.

In addition, about one quarter of those polled have lied to a new partner about their level of debt.

“Not discussing your financial situation might be fine for a short-term fling,” Self Lender CEO James Garvey said, but “if you want a long-term, committed relationship, you have to open up about your money and get on the same page financially.”

Still, the average person waits six months before disclosing debt to a partner, Self Lender found.

And sometimes they never do. In 2 out of every 5 couples, one spouse admits to lying to his or her partner about money, according to a separate survey by the National Endowment for Financial Education. In addition, 75% of those surveyed said financial deception has adversely affected their relationships.

These days, significant debt is harder to avoid, particularly among those just starting out. A typical millennial living in the city carries a hefty burden — about $23,064, according to a LendingTree study — mostly due to record-breaking student loan balances, sky-high rents and car loans.

“Almost everybody has debt,” said Leslie Tayne, a financial attorney and the author of “Life & Debt.” “The problem is that not everybody is open and willing to share that.”

However, different types of debt warrant different reactions, according to Self Lender’s report. More than one third of respondents think credit card debt is worse than student loan debt — and credit card debt over $10,000 is a major red flag.

In fact, credit card debt only ranks behind drinking too much, bad manners and living in a dirty space as the biggest dating dealbreaker. 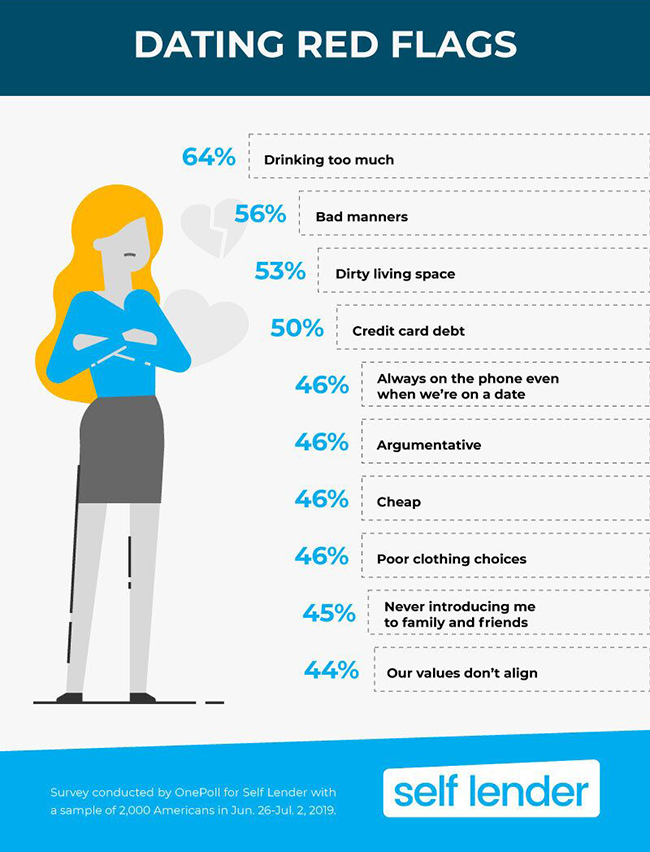 Student loan debt, alternatively, is becoming increasingly accepted as 7 in 10 seniors graduate with debt, owing about $30,000 per borrower, according to the most recent data from the Institute for College Access & Success.

Tayne called off her own earlier engagement over money issues. The person she was dating at the time “had a good job, he owned a home, but he was unwilling to share the details of his finances,” she said. “That was a big red flag for me.”

“I’m not a fan of secrets in a relationship,” Tayne added. “If you are going to get married, it’s important to be open and forthright.”

3M CEO: ‘We’re going 24/7’ to ramp up production of masks to meet coronavirus demand
Baseball phenom Bryce Harper says he prefers Instagram to Twitter
Third US case of coronavirus confirmed in California, health officials say
The next big thing in ETFs could give a boost to long suffering active investors
Powerball jackpot jumps to $373 million. Why taking a lump sum may backfire