Traders on the floor of the New York Stock Exchange.

U.S. stock futures were pointing to a lower open on Wall Street on Tuesday, a day after the Dow Jones Industrial Average, S&P 500 and Nasdaq declined for the second straight session. Investors continued to pile into bonds, pushing yields inversely lower on concerns about the U.S.-China trade war — and increasingly, the anti-government protests in Hong Kong. The Dow, S&P 500 and Nasdaq were all roughly 5% off their all-time highs set in July. China’s central bank, to the chagrin of the Trump administration, set its currency weaker than 7-yuan-per-dollar for the fourth consecutive session.

2. Bonds are close to flashing their most severe recession red flag yet 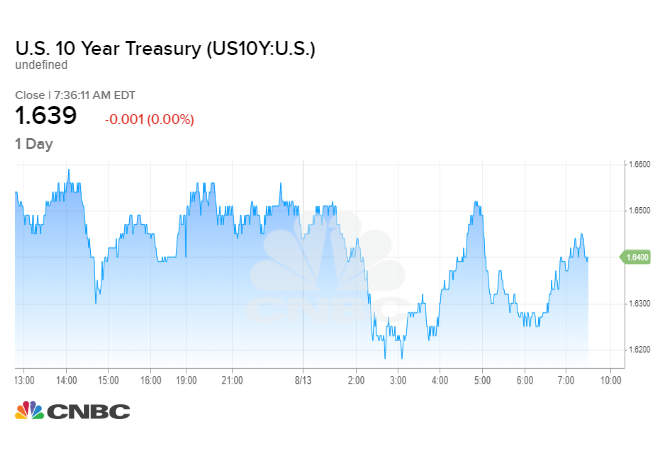 The 10-year Treasury yield remained under some pressure Tuesday as the bond market moved closer to sending its biggest recession signal yet. While various yield curve pairs inverted months ago, the 2-year Treasury yield to 10-year spread looks set to go upside down any day now. The yield curve, the plot of U.S. interest rates based on maturity dates, is at its flattest level since 2007 before the Great Recession. An inversion, which happens when shorter-term rates move higher than longer-term ones, has historically been a reliable recession signal.

Protesters occupy the departure hall of the Hong Kong International Airport during a demonstration on August 13, 2019 in Hong Kong, China.

Pro-democracy protesters crippled operations at Hong Kong International Airport for a second day Tuesday, forcing authorities to cancel all remaining flights out of the Chinese territory. State media outlets in China warned that Hong Kong demonstrators are “asking for self-destruction” as they released a video showing Chinese military vehicles amassing near the border of the city. Hong Kong’s embattled leader said that “lawbreaking activities in the name of freedom” were damaging the rule of law.

4. CBS nears finalization of a merger valuing Viacom at about $12 billion

The Viacom office in Hollywood, California.

CBS and Viacom are finalizing their merger agreement, negotiating a share exchange ratio that would value Viacom at nearly $12 billion. The talks are ongoing, and nothing has been finalized, people familiar with the matter told CNBC on Monday. Shari Redstone, whose National Amusements is the principal owner of both companies, has advocated for a deal. CBS and Viacom nearly merged a year ago before a rift over who would run the combined company derailed discussions.

5. Shares of Uber, just months after their NYSE debut, hit an all-time low

Uber shares were stable in premarket trading Tuesday after falling to their lowest close ever. The stock, still reeling from last week’s massive second-quarter loss, dropped 7.6% to $37. Since its New York Stock Exchange debut in May, Uber has declined about 18% from its initial public offering price of $45 per share. On Monday, early Uber investor Bradley Tusk told CNBC that CEO Dara Khosrowshahi lacks the “ruthless innovation” mentality of the company’s early days that turned it into a global phenomenon, and the stock reflects it.

CNBC’s before the bell news roundup

Get this delivered to your inbox, and more info about about our products and services.
By signing up for newsletters, you are agreeing to our Terms of Use and Privacy Policy.

‘Adulting 101’: How to nail the financial basics and save thousands, starting with your first job
The secret to financial success: Paying off debt
Norwegian energy major Equinor to run ship fitted with ammonia fuel cells
3M CEO: ‘We’re going 24/7’ to ramp up production of masks to meet coronavirus demand
Here’s one way to help figure out how much of a cash cushion you need