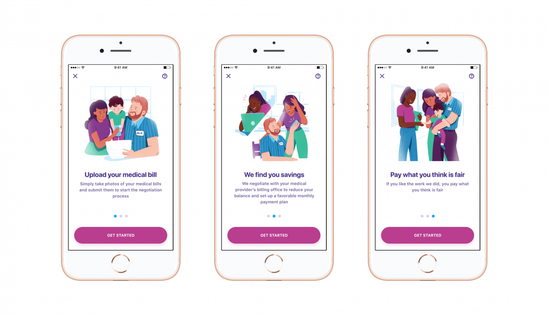 Most Americans believe we live in a country with quality medical care—and have long considered it to be the best in the world. However, the reality is that life expectancy is declining as healthcare costs are rising; so, it’s no surprise that it’s becoming more and more expensive to afford medical care. Relying on personal savings or insurance may not even be enough to pay off expensive medical bills. As a result, 41% of working age Americans have medical bill problems or are paying off medical debt, up from 34% in 2005. For many, a costly medical bill is all it takes to trigger financial ruin as it is now the number one cause of personal bankruptcy. What’s worse is that people may just forego doctor’s visits to avoid the burden of medical expenses.

One company is on a mission to fix this broken system so people don’t have to make a tradeoff between their personal and financial health. Earnin, an app that allows people to get paid the minute they leave work, is launching HealthAid, a service that negotiates people’s unpaid medical bills to make them more affordable. To use the service, a member submits photos of their unpaid medical bills through the app and gives an Earnin agent permission to negotiate a lower amount or favorable payment plan.

Earnin invited some community members to try HealthAid and was able to find savings for about 90% of people. “It was quick, fast and actually pretty helpful,” says Ankeeta, a community member who saved on her medical bills by using HealthAid. “The emergency bill that included two bills I was able to get down by 50%.”

Earnin estimates that people can expect an average of $100 in savings per medical bill. The higher the outstanding balance, the more likely Earnin can negotiate a discount. In one case, Earnin was able to get a patient’s $48,000 bill fully forgiven.

Earnin doesn’t charge any fees or take a percentage of the discounts. Instead, if Earnin has been able to negotiate a discount, they ask people to pay any amount they choose, if they choose to at all. This approach has worked for the company for years with its main product, Cash Out, a service that allows people to track their wages and get paid for the hours they worked rather than wait weeks for their paycheck. Earnin also doesn’t charge a fee for this service and instead asks people to pay what they choose, which has allowed the company to stay in business without ever charging a fee.

“Earnin is helping the community fight against an unfair system and believes that fairness means not forcing people to pay.” says Ram Palaniappan, the founder and CEO of Earnin.

The public has also tried to take matters into their own hands with HBO’s John Oliver and other local TV stations in D.C.and Florida purchasing millions of medical debt for just tens of thousands of dollars. While payoffs on TV may be reserved for the lucky few, Earnin’s HealthAid exists as a more available option for people who want to make their healthcare bills more affordable.

Earnin is rolling out HealthAid to existing community members in the coming weeks. In the meantime, Earnin is inviting members and non-members to sign up for the service by joining its waitlist at www.earnin.com/healthaid.

Stock market live updates: Dow up 400, volatile week, Facebook and Amazon notch all-time highs
Are businesses in danger of coronavirus lawsuits as they reopen?
Post-pandemic, remote learning could be here to stay
Kevin O’Leary’s advice for small business owners as the economy reopens: ‘Practice being thrifty’
SpaceX raised more than the $500 million it was seeking in its most recent funding round